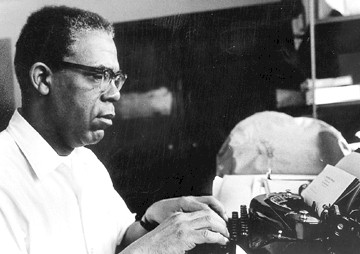 In a 1970 article published in the Black Academy Review, Broadside Press founder Dudley Randall wrote the following concerning his vision and mission as a writer and publisher: “We (Africans in the United States) are a nation of twenty-two million souls, larger than Athens in the age of Pericles or England in the age of Elizabeth. There is no reason why we should not create and support a literature which will be to our own nation what those literatures were to theirs” (no. 1: 40 – 47).

Though Randall never imposed his politics on the poets he edited and published, this statement and the consistency of his editorial practice over the years, reveal his nationalist passion to cultivate the work of African American creative writers, to bring their poems into the homes of African American people by making the publications affordable, and further, to extend this literature to the hearts of people around the world. Randall created Broadside Press “by trial and error,” he said, as a solitary project at first, perhaps not realizing how demanding the work would become, all the while continuing to work full-time in his profession of reference librarian. During those early days, the late Pulitzer prize-winning poet, Gwendolyn Brooks, a close friend, wanted to know his title within the Broadside Press organizational structure. He replied: “Since I in my spare time and in my spare bedroom, do all the work, from sweeping floors, washing windows, licking stamps and envelopes, and packing books, to reading manuscripts, writing ads and planning and designing books, just say that Dudley Randall equals Broadside Press.”

Operating in this modest manner, Randall began by producing 8 ½ x 11 inch broadsides on which single poems were printed in attractive formats, an idea he borrowed from the Russians, whose tradition of making popular poems and songs available to the people at minimal cost he had learned of during a trip to the Soviet Union. The first broadsides sold for under a dollar and subsequent books were priced as reasonably. For example, Audre Lorde’s collection, From a Land Where Other People Live, published by Broadside in 1973 and nominated for a National Book Award in 1974, sold for only $1.50.

“Ballad of Birmingham,” Randall’s poem on the bombing deaths of four little girls in a Birmingham church during the civil rights movement, was the first Broadside, published in 1965. In the decade following, Broadside Press grew into one of the world’s finest literary collections, with over 100 titles, most of which were poetry. However, Randall had also developed the excellent Broadside Critics Series of literary criticism by outstanding scholars such as Addison Gayle and Houston Baker, as well as the Broadside Voices series, which featured recorded performances by Haki Madhubuti, Sonia Sanchez and others, precursors to the contemporary performance poetry movement.

The Broadside collection included some surprises: a cookbook, Safari of African Cooking (1972), a play for television by Detroit writer, Regina O’Neal (1974), and several children’s books. Significant prose works in the inventory included Haki Madhubuti’s first book of political analysis and commentary, From Plan to Planet (1973), and Ms. Brooks’ Report from Part One (1971), the first part of her autobiography. Randall also distributed the works of 30 African diasporan poets of the Paul Breman Heritage Poetry Series, published in England. 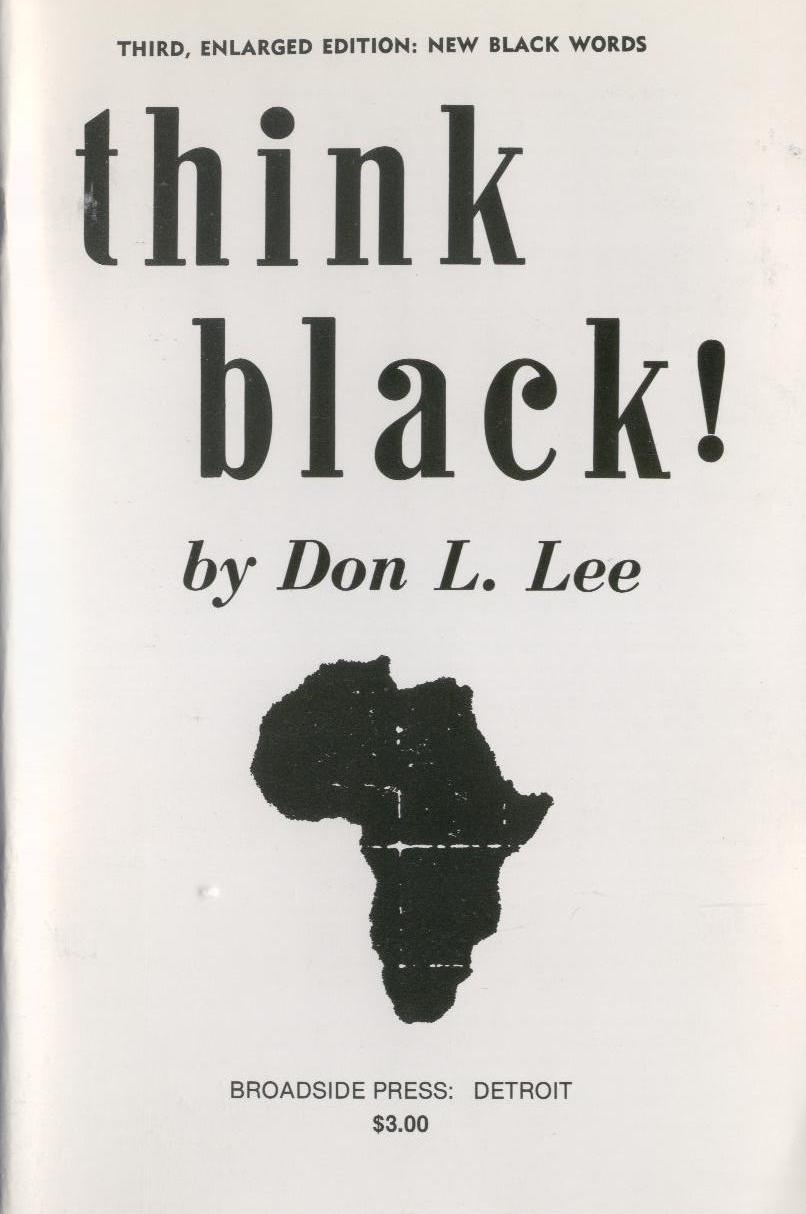 By the mid ‘70’s, the Broadside repertory – more than a hundred single broadsides, as well as books, audio tapes, LP’s and posters – was in demand by individuals, bookstores, libraries and universities around the world. For example, over 80,000 poetry books of Don L. Lee (now Haki Madhubuti) were in circulation during this period, and Randall struggled to keep up with demands for new editions.

The work involved in building the Press had been a monumental effort, which, one might have foreseen, finally exhausted Randall. He needed to rest. Through the interventions of Haki Madhubuti, whose own Third World Press was thriving by then, Broadside Press came under the guardianship of a religious and cultural organization in Detroit, the Alexander Crummell Center for Worship and Learning. Gloria House, a member of the Crummell Center, coordinated a collective of Crummell volunteers to relocate the inventory from Randall’s home to the Church basement, and begin to fill the mail orders. With the cash flow, Crummell Center paid off the debt to Harlo Printing, a local company, where most Broadside books had been produced.

The Crummell Center collective also ensured ongoing visibility for the Press by organizing regular cultural programs for the community, including writing workshops, readings by poets of national prominence such as Nikki Giovanni, and a Broadside Lecture Series that welcomed scholars such as Harold Cruse, author of Crisis of the Negro Intellectual, Dr. Safisha Madhubuti and many others. In keeping the Press alive in this manner, Crummel Center volunteers showed Randall that the community treasured his work, and awaited his return to health, factors that contributed positively to his recovery.

After a few years, Randall was ready to resume an active role. He published Song for Maya by Melba Boyd (1982), and the first book of poems by Aneb Kgositsile (Gloria House), Blood River (1983). He also instituted the Broadside Poet’s Theatre, which ran every third Sunday of the month.

In 1985, Hilda and Don Vest purchased the Press from Randall. Hilda Vest — a poet who was a friend of Randall’s and involved in the Broadside Press activities at the Crummell Center — and her husband Don, an experienced businessman and cultural activist, moved the Press office to Lafayette Street in downtown Detroit. They continued the Broadside Poet’s Theater, won state funding to institute the successful Poets-in-Residence Program in collaboration with the Detroit Public Libraries, and secured additional grants to fund poetry projects for various underserved populations in the City.

Under the Vests’ direction, Broadside Press reclaimed its key role as publisher of excellent writings by African Americans, while continuing its legacy as a cultural haven for writers excluded from mainstream publishing opportunities. The Vests sold the Press to a collective of cultural activists in 1998: Richard Donelan, Ed.D., Sondai Lester, Lindiwe Lester, Aombaye Ramsey, Ph.D., Tene Ramsey, and Willie Williams and Gloria House, both of whom had been Broadside Board members during the Vests’ direction of the Press, and volunteers during the Crummell Center guardianship years. The current Broadside Press board of directors includes: Chris Rutherford, Gloria House, Ph.D., Albert Ward, Aurora Harris, Uri Heru House and Mojisola Clement. Under their direction, five new titles have been published. (See Current Broadside Booklist.)

The Broadside collection represents three generations of poets: Randall, Gwendolyn Brooks, Margaret Walker, Margaret Danner, Robert Hayden, Sterling Brown and their peers in the Black literary community, whose works laid the foundation; the younger poets of the Black Consciousness era, including Sonia Sanchez, Willie Kgositsile, Nikki Giovanni, Haki Madhubuti, Etheridge Knight, and Audre Lorde, all of whom later won national and international acclaim; and a still younger generation whose works emerged in the 80’s. The poetry of these three generations comprises a repository that reflects the important political and cultural issues of African American society from the first world war to the beginning of the 21st Century, expressed in diverse literary forms – including revolutionary manifestos, exquisite love songs, humorous toasts and yearnings for freedom. The entire enterprise is a testament to the standards that Randall established: editorial excellence and respect for artistic differences within the African American community.

As Broadside celebrates its 50th anniversary in 2015, it will become Broadside/Lotus Press, as Dr. Naomi Long Madgett, founder and publisher of Lotus Press, retires and passes on her legacy to join with that of her good friend and publishing colleague, Dudley Randall.